Physicists at New York University (NYU), US have developed a technique to record three-dimensional movies of microscopic systems, such as biological molecules, through holographic video. The technique, developed in the laboratory of NYU Physics Professor David Grier, is comprised of two components: making and recording the images of microscopic systems and then analyzing these images. To generate and record images, the researchers created a holographic microscope. It is based on a conventional light microscope, which uses a collimated laser beam instead of on an incandescent illuminator.
When an object is placed into path of the microscope’s beam, the object scatters some of the beam’s light into a complex diffraction pattern. The scattered light overlaps with the original beam to create an interference pattern reminiscent of overlapping ripples in a pool of water. The microscope then magnifies the resulting pattern of light and dark and records it with a conventional digital video recorder. Each snapshot in the resulting video stream is a hologram of the original object. Unlike a conventional photograph, each holographic snapshot stores information about the three-dimensional structure and composition of the object that created the scattered light field. The recorded holograms appear as a pattern of concentric light and dark rings.
For analyzing the images the researchers based their work on a quantitative theory, the Lorenz-Mie theory, which maintains that the way light is scattered can reveal the size and composition of the object that is scattering it.
The application of the technique ranges from research in fundamental statistical physics to analyzing the composition of fat droplets in milk.
www.nyu.edu 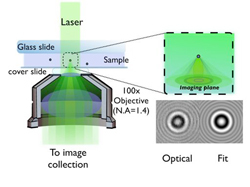 In the microscope, a laser beam illuminates the sample. Light scattered by the sample creates an interference pattern which is magnified and recorded. Then measurements of the particle’s position, size, and refractive index are obtained.

Researchers at the UCLA (University of California, Los Angeles, US) Henry Samueli School of Engineering and Applied Sciences have developed the serial time-encoded amplified microscopy (STEAM) technology. It is a novel, continuously running camera that enables real-time imaging at a frame rate of more than 6 MHz and a shutter speed of less than 450ps – roughly a thousand times faster than any conventional camera. Keisuke Goda, Kevin Tsia and team leader Bahram Jalali describe a new approach that does not require a traditional CCD (charge-couples device) or CMOS (complementary metal-oxide semiconductor) video camera. The new imager operates by capturing each picture with an ultrashort laser pulse. It then converts each pulse to a serial data stream that resembles the data in a fiber optic network rather than the signal coming out of the camera. Using a technique known as amplified dispersive Fourier transform, these laser pulses, each containing an entire picture, are amplified and simultaneously stretched in time to the point that they are slow enough to be captured with an electronic digitizer. Those cameras could be used for observing high-speed events such as shockwaves, communication between cells, neural activity or laser surgery.
www.ucla.edu